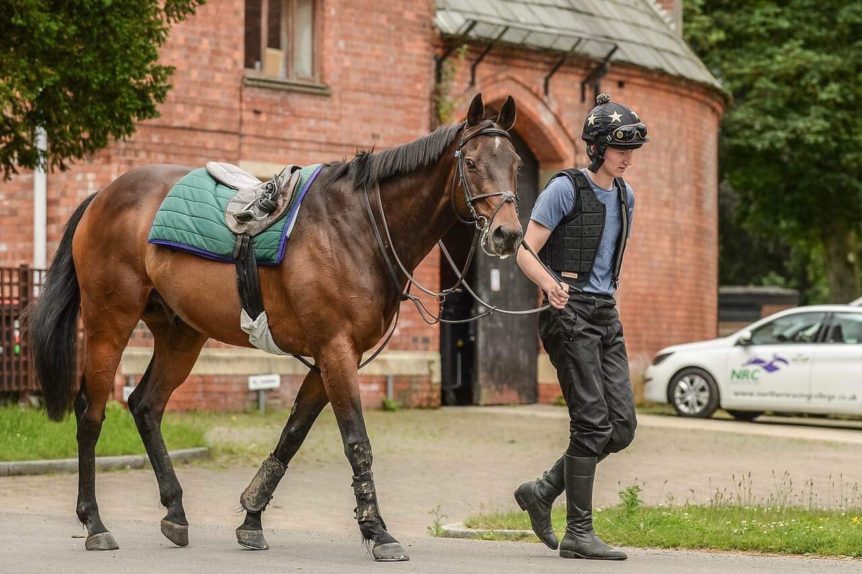 Like Ryan Colley, who is now an equine welfare integrity officer and starter with the British Horseracing Authority, Thomas, 22, spent his mentorship in Kentucky, the cradle of racing in the US, under the auspices of Remi Bellocq, executive director for equine programming at the North American Racing Academy.
Back to his day job with the Harry Fry stable in Dorset, Thomas recounts his experiences.

RYALL LEADING UP FOR HARRY FRY

Let me start from the beginning. In common with many youngsters, my ambition from an early age in my home town of Doncaster was to become a professional footballer. I was involved with local teams from the age of four, and the sport consumed my childhood. However, after I had been with been with my Sunday league team Barnburgh & Harrington for over 12 years, the club called time, leaving me somewhat puzzled about what to do with my spare time and career.

In June 2014, having successfully completed my A-levels, I was accepted by Leeds Metropolitan University to study business and sport management. After much discussion with close family and friends, I decided to decline the offer in favour of pursuing a career in the horseracing industry. Some might say it was a bold move, but I felt that I was ready to get out into the real world, so to speak, and start my own life adventure.

My strong interest in horseracing came from my father’s side of the family. After owning a couple of horses as part of a syndicate, I went to local racedays from an early age, and this led to a family friend introducing me to the National Horseracing College, which is situated only ten miles from my home in Doncaster.

After researching what the college offered, I was successful in my application for a place on the 12-week residential course to part take in the Horse Care and Riding Level 1 Diploma. That was another bold move, as I had zero experience riding horses of any kind. However, I was determined to be successful in the industry.
After completing the course, I was sent to the stable of Harry Fry, a young, up-and-coming National Hunt trainer who was once pupil assistant to multiple champion trainer Paul Nicholls, for whom I worked as a stable lad, alongside completing Levels 2 & 3 in the Horse Care and Riding Diploma.

My time with Mr Fry in Dorset has been invaluable, as I have experienced the racing industry in a totally hands-on role. I believe this is a huge starting point in any individual’s racing career, as it introduces them to how much time and thought is put in to the training of each individual horse. After four seasons, I was promoted to the role of assistant head lad, which meant taking on more responsibility, as I was in charge in his and the assistant trainer’s absence.

Having always had a keen interest on how things are run behind the scenes, the early part of 2018 produced a rare opportunity to apply for an IFHRA mentorship. Much to my surprise but delight, I was the chosen and the state of Kentucky in the US was my preferred destination.

Whilst in the States I was lucky enough to work my way around the different organisations within the horseracing industry, which included shadowing the administration departments in the Jockey Club, overseeing raceday operations at Churchill Downs racetrack and monitoring the media team at Keeneland racetrack. I was also able to work and attend the Keeneland September yearling sales.
My trip started at the Jockey Club, where I was first shown how the whole of US racing is structured. I spent much of my time with state stewards reviewing races, with racing secretaries taking entries, and with the international cataloging department going though sales and conditions books. During this part of the mentorship, I successfully completed the Racing Officials Accreditation Programme Certificate, and the whole experience has given me a huge understanding about the different roles and responsibilities within racecourse regulation.

I also spent ten days at the Keeneland September yearling sales, where I was able to lend a hand to a local stud farm. This gave me an understanding on how a sale of this magnitude is run, whilst receiving a great insight on the pedigree and bloodstock side of things.

The middle two weeks of my stay were spent at Churchill Downs racecourse, home of the famous Kentucky Derby and this year’s Breeders’ Cup, where I was fortunate to work my way around the different departments of the racing office. I divided my time between officials such as the clerk of the scales, paddock judges, placings judges, the claims clerk, the photofinisher and clocker, and stewards, as well as the valets.

Again, this gave me an even more in-depth view about the skills and responsibilities required for each individual role within the racing office.

My time in the States concluded with a week at Keeneland racecourse, focusing on broadcasting and communications with its media department before and during the track’s fall race meeting. Working with this energetic and busy production team, including the British company Equine Productions and the racecourse’s official broadcaster, I was able to experience at first hand the operation of American TV crews such as TVG and NBC Sports, two of the country’s biggest sports broadcasters, and the press team that interviews jockeys post the stakes races.

The time spent out in America has been invaluable and has given me an unbelievable insight into what actually happens behind the scenes within the industry.

I would like to thank everyone who helped to make this unbelievable experience possible. That includes everyone at the National Horseracing College and IFHRA, including Remi Bellocq, and my boss Mr Fry for being so understanding and supportive.

Also, I have to give huge thanks to HH Sheikh Mansoor bin Zayed Al Nahyan, HH Sheikha Fatima bint Mubarak, the HH Sheikh Mansoor Global Arabian Flat Racing Festival, and its executive director Ms Lara Sawaya, without whom none of this would have happened.