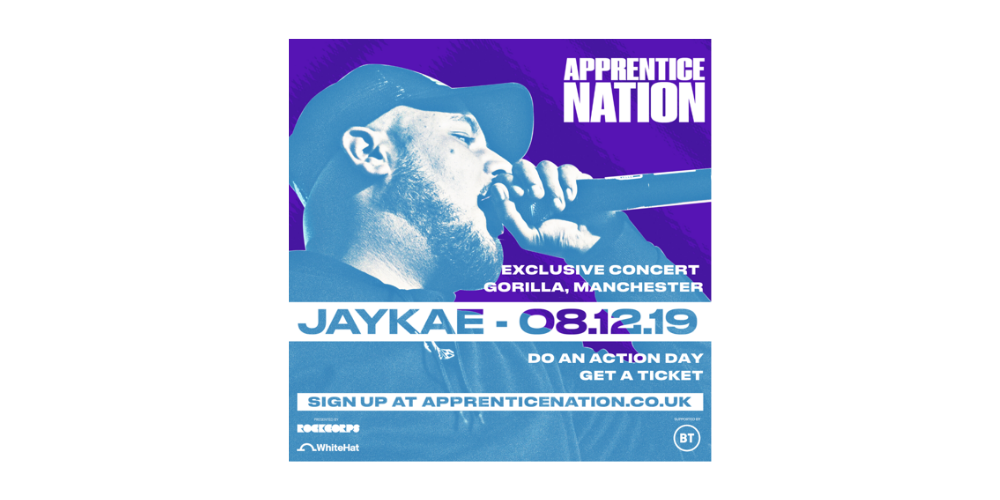 Jaykae, who hails from Birmingham, will be performing an exclusive show for young people as a reward for taking part in an Apprentice Nation Action Day. Action Days will be taking place in Manchester throughout November up until 8 December.

Apprentice Nation was established to reach and inspire young people from all backgrounds to start their careers through an apprenticeship. The platform, supported by BT, promotes all kinds of apprenticeships while supporting social action projects to help local communities. Action Days will offer invaluable advice on apprenticeships as well as career advice and a social action element. Every young person who attends will earn a ticket to the exclusive celebration concert.

“I’m excited to be part of Apprentice Nation in Manchester. This is an amazing platform, supporting young people to land a career they love. I know first-hand how important it is to pursue what you’re passionate about. I wouldn’t be able to do what I love if I hadn’t had people guide me along the way and I’m lucky enough now to be in a position to set an example for young people. Look forward to seeing you on 8 December in Manchester!”

“We’re stoked to have Jaykae on board for Apprentice Nation in Manchester. Our aim is always to excite and engage young people from all walks of life through the power of music, and ultimately help open up their world to new opportunities. So we’re beyond thrilled to have Jaykae share his inspiring story. It’s going to be an incredible show.”

Apprentice Nation is the coming together of RockCorps, who have a proven track record of inspiring young people to take action through music concerts, and WhiteHat, Euan Blair and Sophie Adelman’s start-up building an outstanding alternative to university through apprenticeships. Apprentice Nation’s mission is to engage a generation of potential future leaders who see apprenticeships as their route to success.

“We plan to bring White Hat to Manchester in 2020, so what better way to announce our arrival than starting with Apprentice Nation.”

Nearly 1000 young people applied for the project’s landmark show in London earlier this year which culminated in a concert starring Grammy nominated, alternative R&B artist 6LACK and Apprentice Nation have since gained the support of BT for their dates in Manchester.

“I’m so grateful that I could be part of Apprentice Nation. It was really enlightening and gave me the confidence and reassurance that I needed to decide against university. It even ended with an intimate concert featuring 6LACK. I’ve come a long way already and am on my way to securing a great apprenticeship. I can’t wait to start!”

To find out more about Apprentice Nation and how they are opening more opportunities to young people across the country visit: www.apprenticenation.co.uk