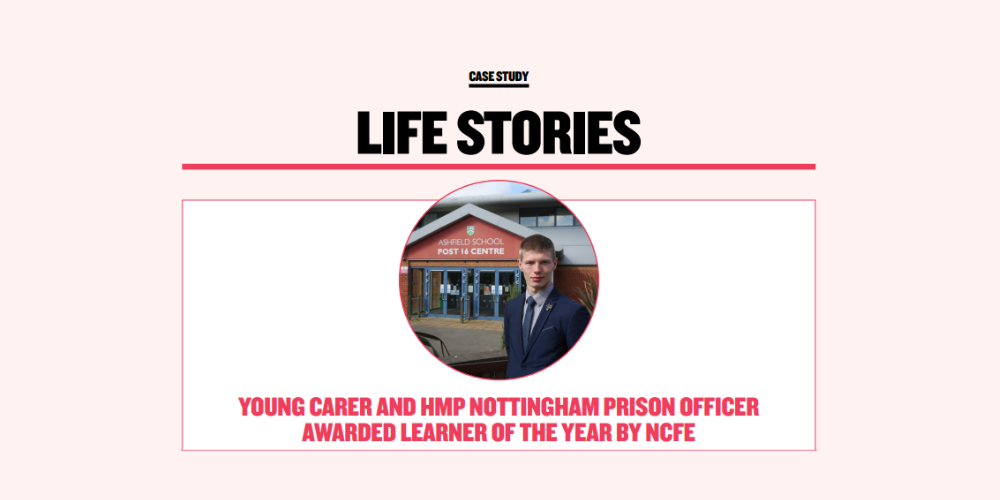 NCFE has announced its Learner of the Year

NCFE has announced its ‘Learner of the Year’ in the 2019 V Cert Aspiration Awards. Now in its second year, the awards celebrate learners with big aspirations who are using NCFE qualifications to help them reach their goals in life.

Understanding that achievement is more than just getting the best marks in exams, the Aspiration Awards asked schools and teachers to consider a range of criteria, including achievement rates, going the extra mile and overcoming personal challenges, when nominating a pupil for Learner of the Year.

NCFE received an overwhelming response and after evaluating many compelling entries from hardworking learners, we were delighted to announce Mark Miles, a Prison Officer and former learner from Ashfield Comprehensive School in Nottingham, as the winner. Mark is an inspiring young man whose personal circumstances were stacked against him. Having lost his father in 2011, Mark also acted as a carer for his mother whilst at school and continues to do so. These obstacles didn’t prevent him from excelling in his qualification and quickly securing work.

Mark was a committed pupil and achieved exemplar marks in each of his units during his Level 3 Extended Diploma for Entry to the Uniformed Services. Such was Mark’s incredible progress and attainment in the qualification, he has acted as a role model and mentor for other pupils in his class.

‘Mark is the embodiment of the values and standards that we encourage in all of our students. He is an outstanding example of what can be achieved in the face of adversity and is an inspiring individual whose consideration for others is humbling to witness. We are absolutely delighted that NCFE is acknowledging him in this way; he is a truly worthy winner and a great ambassador for Ashfield School and its Uniformed Services programmes of study.’

‘I am honoured to have won this award and I am so grateful to Mrs. Taylor for nominating me. The skills and knowledge I have developed during my NCFE qualification have been invaluable in all aspects of my life, especially to the beginning of my new career and continue to serve me well to this day. In the future, I know that I will be able to use these transferable skills in order to further develop myself and help me to progress in my career.’

Mark’s achievements have also been complemented by his commitment to extracurricular activities and voluntary work including multiple triathlons and other fundraising efforts to raise money for Help for Heroes, the Blue Lamp Foundation and Seeing is Believing. Mark has also pursued his sporting interests and is now the Super Welterweight Midlands Champion with the Inspired Championship Boxing authority and has gained his black belt in Judo.

‘It is a great honour to be able to recognise the achievements and determination of such an inspiring young man with a bright future. Mark demonstrates the endless possibilities which are available to learners of technical qualifications especially when paired with their own grit and determination. Mark is a deserved winner of the Learner of the Year award. ‘

NCFE would like to extend huge congratulations to all of those nominated in this year’s Aspiration Awards. Submissions for the 2020 awards will open later this year and you can find out more about the awards on the NCFE website here.